New Procuratie building is located in the southern part of the St. Mark Square. It was created in the late 20s of sixteenth century by Vincenzo Scamozzi.
Its classicist block is modeled on the building of Old Procuratie. Originally it housed the room for prosecutors, later became the seat of the governor of Napoleon, and later Austrian. After the unification of Italy in the New Procuratie successive kings resided. Currently, there are presidential suites. There is also museum rooms.
In the building is also the oldest coffee in Venice – Vaffe Florian. It exists from 29 December 1720. 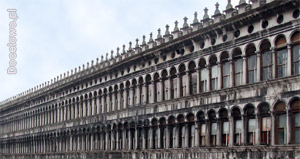 Old Procuratie building located on the northern side of the St. Mark Square. This is where were transferred Prosecutors, who were, after the Doge, the most important people in the government of Venice.
The property already existed in the twelfth century, during the reign of the Doge Sebastian Ziani. Its reconstruction took approx. of 1500. Unfortunately, already 12 years later the building was burnt. Ultimately responsible for its reconstruction was gave to Bartolomeo Boun. Construction-architectural work was completed by Jacopo Sansovino about 1532. 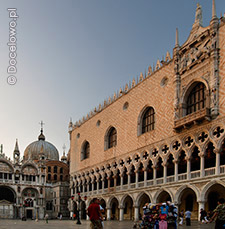 Doge’s Palace served an important role in the public life of Venice. It was the seat of successive rulers and governments. Initially, its served as defensive, but over time became the object of representation.
The original palace was destroyed by fire in 976. It was rebuilt in the eleventh century, but since then it has been subject to a number of expandability and reconstructions. For example, the Doge Sebastian Ziani changed the destiny and functional layout throughout the palace. On his order was built separate building of Old Procuratie to which senior officials were transferred. Another profound change occurred in 1340, when it was added to the building of the Great Council. The building is distinguished by its facade with two-storey, openwork arcades.
Currently, the Doge’s Palace stands out with three floors that surround three sides of the Renaissance courtyard. The ground floor and the first floor is decorated with arcaded loggias, while the walls on the second floor was covered by plates with two-color stone. Between the windows placed numerous reliefs. The whole crowned with openwork attic.
It is worth mentioning that one of the palace’s wings connects the famous Bridge of Sighs with new prison.
We must also remember the fact that after the loss of independence, the Doge’s Palace was the seat of the French, then the Austrian. In the years 1811-1904 in parts of the rooms was located the Marciana Library. Today it is a museum Museo dell’Opera. Also available to visitors are frescoed rooms of the palace, and Sala del Maggior Consiglio, where is a retinue of 76 doges of Venice. One of the seats were covered with blackness. This was done to commemorate the Doge Martin Falier, decapitated in 1355 for plotting against the republic. 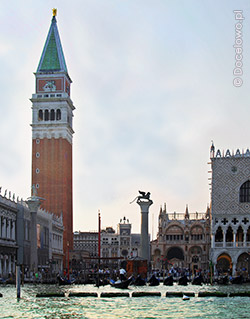 Piazzetta di San Marco is a small plaza located between the coast Canale di San Marco and the St. Mark Square. On the right side (looking from the port) is the Doge’s Palace, and the left – the building Liberia Sansoviniana, held by the National Library Biblioteca Marciana Nationale. Beside it, the mint building is erected in which Venetians beat own coin. On the other hand, at the edge of the Canale di San Marco located a small port, which is a haven for tourist ships and gondolas. In addition, at the square is also the church of San Giorgo Maggiore and maritime customs chamber building.
Piazzetta formerly served as the unofficial meeting place of politicians. Here also held public executions. The place of execution was between two twelfth-century columns spiked near the coastal boulevard. 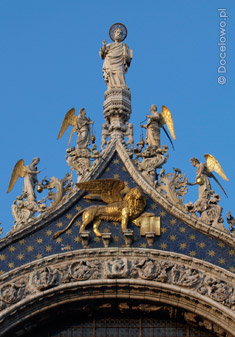 St Mark’s Basilica was built at St. Mark’s Square. Venetians wanted by this way dignified burial relics of the patron of the city.

As early as 828 Venetian merchants stole his remains from Alexandria and brought to the lagoon. According to legend, its here rested St. Mark, what the angel had told him. It is no wonder that the evangelist was recognized as the patron of Venice, and his symbol – a winged lion holding a book with the words “Pax tibi, Marce evangelista meus” was placed in the coat of arms of the Republic.

The first church was founded by Doge Angelo Partycipazio in 832. Unfortunately, in 976 it burnt down. The same happened with the nearby Doge’s Palace. To the reconstruction began only in the years 1063-1094. Since then, both the exterior and solid of basilica was rebuilt many times. During the reconstruction it was modeled on Constantinople St. Apostles church. For this reason, the temple erected on a Greek cross. Characteristic are also domes, arranged over four aisles located in the arms of the cross and over the field at the intersection of the aisles. This refers to the construction of Islamic architecture, as evidenced by the fact that similar solutions applied in the construction of a Umar mosque in Jerusalem and Fatimid dynasty mausoleum in Cairo.

Subsequent years brought another rebuilding of the temple. Was added to it, inter alia, narthex surrounding the input arm. In addition, each Venice vessel was obliged to imported gifts, decorating then basilica. The result is a building diverse, but also very interesting in terms of style.
Its distinguishing feature is also a 52-meter facade with five portals topped with semicircular tympanums and decorated with colorful mosaics. Added to this is a very colorful mosaic from 1260 and horizontal gallery, available for tourists. Its central location is a copy of a four horses from the quadriga. The original is in the Museo Marciano. The idea to bring the sculpture from the Constantinople Hippodrome came up with the Doge Enrico Dandolo. The sculpture is preserved in very good condition. Its construction dates back to the period between the IV century BC and I century BC.

The interior of the church is a bit less diverse, but looks equally impressive. Visitors conspicuous mainly marble columns topped with gilded Corinthian heads. In addition, the walls and pillars were covered with a slab of marble, and on the floor, domes and vault Constantinople artists drew up a beautiful mosaic. Later they were joined by the artists of the Venetian. Total mosaic covered with approx. 4,000 m2.
In the Basilica, just behind the main altar, is extremely valuable monument of art jewelry, dating from the reign of the Byzantine Empire. This is the Golden Altar (Pala d’Oro), the first part (plaque with dimensions 3,40×1,40 m) was made in 976 in Constantinople. Over time, added more plaques. Each of these contains, among others, 1300 pearls, 300 emeralds, 300 sapphires, 400 grenades and 15 rubies.
Characteristic feature is also Capitello del Crocifisso or crucifix brought from Constantinople in the early thirteenth century. It covers the ciborium supported by six marble columns topped by Byzantine, gilded heads. At the top of the canopy placed agate with 31 cm diameter.
In addition to the temple items discussed briefly, is worth to mention coming from the tenth century icon of the Madonna Nikopea, two pulpits of the fourteenth century and fourteenth century baptistery.

Undoubtedly, St. Mark’s Square is the most famous place in Venice. Although located in the oldest part of the city, however, operate there modern shopping malls, restaurants and other public buildings.
Square story begins in the ninth century, when it was built near the St Mark’s Basilica. Initially it occupied a small area, in the vicinity of the temple. The additive square was divided into two parts by one of channels flowing there. Almost three hundred years later square was enlarged to its current size. This happened because of the meeting of Pope Alexander III and Emperor Frederick Barbarossa. Subsequent centuries brought many other important meetings and events. Just mention the “marriage of the sea”, the ceremony celebrated during Easter.
Currently, St. Mark’s Square is connected to the Piazzetta San Marco. Area restricted by the Doge’s Palace and the St Mark’s Basilica. In front of the temple built so called “Napoleon wings”, which is building in the classical style, interconnecting facilities Old and New Procuratie. It was created at the request of Bonaparte, delighted by architecture of St. Mark’s Square, which found the most beautiful room in Europe.
Beside the Old Procuratie is clock tower and beside New located the bell tower St. Mark’s Campanile. Close to the tower erected the building of episcopal curia. Most of them are historical buildings, built even in the sixteenth century. The square surface was replaced at the beginning of the eighteenth century.
It is worth noting that St. Mark’s Square is often flooded by water. Fortunately, the water disappears as quickly as it came. However, to tourists be able to move freely in the area, Venetians setting up low platform formed in strings for pedestrians. 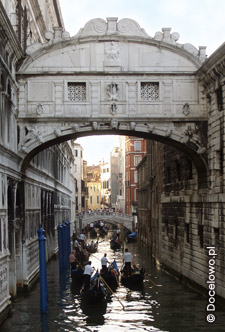 With the Venetian Bridge of Sighs are associated both romantic and gloomy stories. Legend says that lovers who kiss on the Bridge, will soon tie the knot. Unfortunately, the history of the building is much more sad…
Bridge of Sighs lie beside Palace Canal and connects the Doge’s Palace with the road leading to the prison. Most likely, the name comes from the sighs of convicts, who the last time could look from this bridge to the world. Apart from them, it was also a place of love sighs, missing for their partners. It is no wonder that the bridge was on the cards repeatedly fusing novels and collections of poetry.